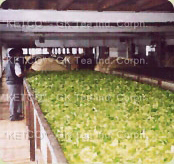 INTRODUCTION:
In late seventies there was revolutionary change in process of withering. Natural withering was replaced by forced Air device. Such device consisted of one axial flow fan, ducting with air controlling damper and a long tunnel covered with wire mesh. In total the piece was called a Withering Trough.

DESIGN:
The axial flow fans 36" to 56" diameter are popularly in use. According to its air delivery measured in C.F.M. The standard length of the tunnel (trough) is made - generally 60' to 100' long.

KETCO" prefabricated In standard Withering Troughs the Axial fan which is inscribed in a steel-casing and the ducting is fabricated out of steel plates but the material used for making the trough is either bricks & cement or timber & ply wood, in different tea growing areas.

Here, the materials used are mild steel angles & galvanised iron sheets. The whole trough is prefabricated in the workshop and delivered to the site for erection. Each unit can be assembled and made ready to use in a couple of hours.